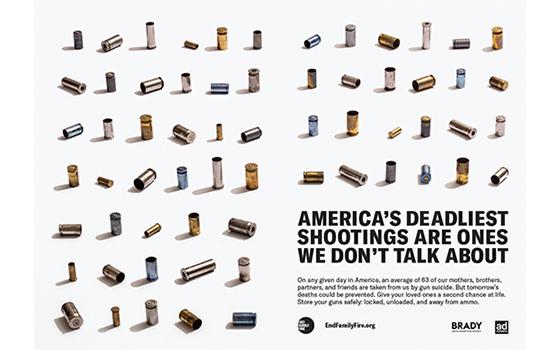 Anti-gun violence group Brady and the Ad Council are launching a
new “End Family Fire” campaign designed to boost awareness of gun suicides and the role that safe gun storage can play in preventing it.

So-called “family fire” is a
shooting involving an improperly stored or misused gun in the home.

The new suite of PSAs, created pro bono by ad agency McKinney, includes TV and social video spots that immerse the viewer in
the first-person perspective of a video game to highlight the fact that “with gun suicide, there is no extra life.”

Radio spots feature the voices of real people who lost loved
ones to gun suicide. Print and digital as well as out-of-home ads present statistics including how 63 people a day die from gun suicide in the U.S. Viewers are directed to visit EndFamilyFire.org to
learn additional information and get tips to make their homes safer.

“We found a huge audience of gun owners out
there doing nearly everything right—but also keeping at least one loaded gun at hand, thereby leaving their family vulnerable to the unique agony of gun suicide,” said CJ Franzitta, group
strategy director, McKinney. “By ensuring every firearm is properly secured, they can protect against that outcome.”

Per the Ad Council model, the PSAs will appear in donated media
nationwide. Media companies that have committed to support the creative include the Bustle Digital Group, The New York Times and The Washington Post.

In addition to Brady and the Ad Council,
the effort was developed with input from suicide prevention, mental health, public health, and veterans’ groups.