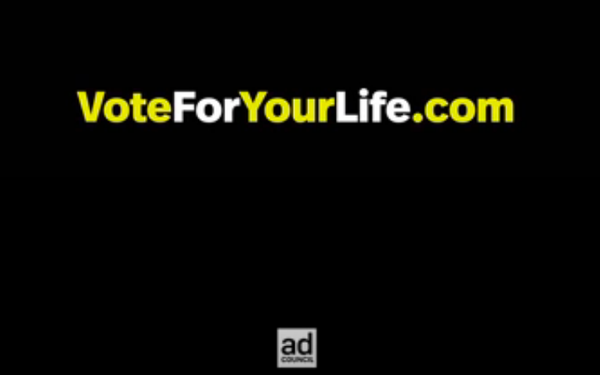 The Ad Council, ViacomCBS and other partners are joining forces to launch Vote For Your Life, a nonpartisan national campaign urging young people to vote in this year’s election on Nov.
3.

The campaign, developed by the Entertainment & Youth Group of ViacomCBS, is designed to address concerns of voters between the ages of 18 and 30, primarily Black and Latinx audiences,
by highlighting the issues of jobs, security and justice. The PSA is available in English and Spanish.

Viewers are directed to visit the
VoteForYourLife.com site where they can check their registration status and take the steps to register, if needed. The site also provides resources for potential voters to make a plan to vote either
absentee, early or in person on election day.

The resource hub, which is powered by BallotReady and TurboVote, is accessible in English as well as Spanish at VotaPorTuVida.com.

MTV is also funding the cost of printing and mailing ballot applications through Oct. 6, which enables voters to receive the applications and return in time.

Similar to the recent
#AloneTogether campaign from the Ad Council and ViacomCBS, Vote For Your Life is being carried by all ViacomCBS Entertainment & Youth Brands and offers platform-agnostic creative assets that
companies can customize to further extend the campaign on their platforms.

Nonprofit partners, such as Circle, EquisLabs, Florida Rights Restoration
Coalition, Millennial Action Project, are some of the other groups lending support to the effort.

“With the pandemic, social injustices, protesting and environmentally caused catastrophes like
the wild fires on the West Coast and the hurricanes on the East Coast, our audiences are facing unprecedented and life-wrenching decisions which make the 2020 election so important to their daily
lives. That’s why we’re launching the Vote For Your Life campaign to give them the resources to easily register, check their early voting options, vote safely and as early as possible.” said
Chris McCarthy, president, Entertainment & Youth Group, ViacomCBS.”