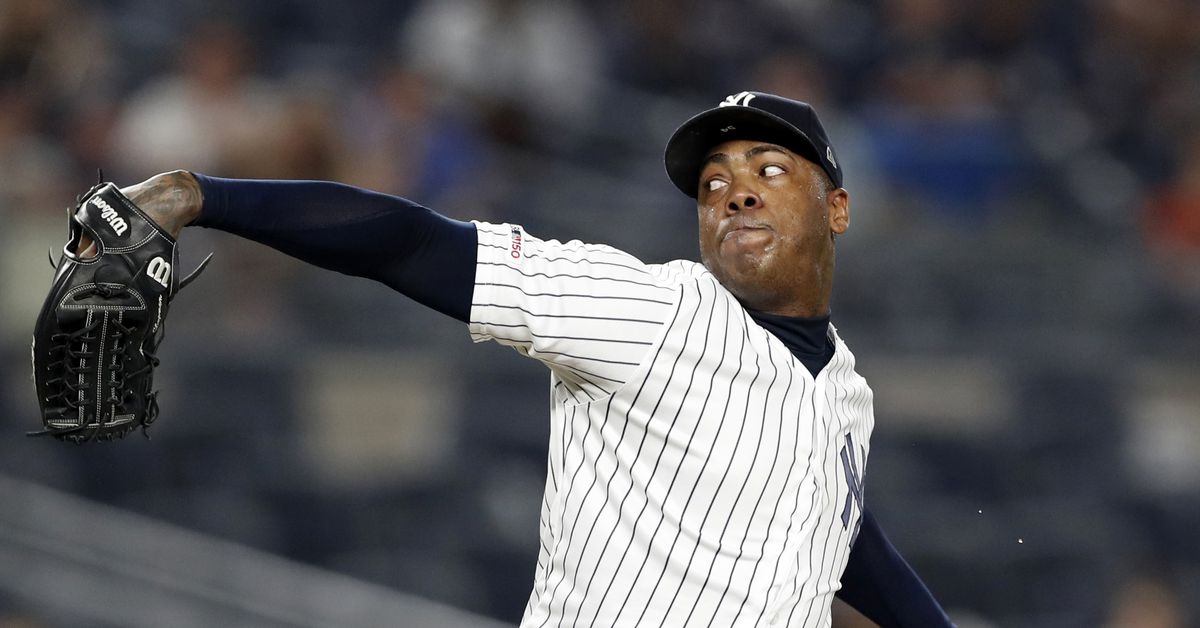 NEW YORK — All-Star closer Aroldis Chapman has been cleared to return to Yankee Stadium following a bout with the coronavirus and was expected to play catch Friday before New York hosted the Boston Red Sox.

Yankees manager Aaron Boone confirmed Chapman’s return and said he wasn’t sure when the hard-throwing left-hander would be ready for game action.

“The good thing was he was never really sick, so he was able to maintain probably a level of physical conditioning that other people may not have been able to,” Boone said.

Chapman had been isolating in his Manhattan apartment since his positive test July 11. He was waiting to register consecutive negative tests. His symptoms were mild.

The 32-year-old pitcher constructed a weight room in his living room to stay in shape. He posted videos of his workouts on social media.

Boone said Chapman also purchased a sock-shaped device into which he threw baseballs. The contraption is attached to the forearm and extends past the hand, allowing it to “catch” the ball when it’s thrown.

Boone said the Yankees wanted to evaluate Chapman before deciding on a time frame for his return.

“I’m hopeful he’s a little ahead of the game from where some other people might be,” Boone said.

Right-hander Tommy Kahnle was added to the injured list with forearm tightness. He had an MRI taken Friday and was scheduled to visit team physician Dr. Christopher Ahmad.

Boone said Kahnle felt discomfort working out in Baltimore on Tuesday, then shut down a planned throwing session Wednesday.

Right-hander Masahiro Tanaka said Friday he will wear a protective insert in his hat when he returns to the mound Saturday against Boston. Tanaka has been out since being hit in the head by Giancarlo Stanton’s line drive during New York’s first official preseason workout.

Boone also said no determination had been made on the Yankees’ schedule for next week.

New York was supposed to play a series in Baltimore, but two of those games were rescheduled for this week as part of a reconfigured slate after the Miami Marlins’ season was suspended due to a team-wide outbreak of the coronavirus.

The Yankees have discussed playing the Philadelphia Phillies next week instead. Their scheduled series this week was postponed because Philadelphia had recently played against Miami.

“I don’t know anything for certain yet,” Boone said. “I know there’s some optimism there, but I think it’s still too early to know.”