Despite a deal confirmed earlier this week for U.S.-based Oracle to serve as its “trusted technology partner,” popular social media app TikTok — as well as another popular Chinese app, WeChat — will
be banned from U.S. app stores, effective September 20, the U.S. Department of Commerce announced this morning.

“Today’s actions prove once again that President Trump will do
everything in his power to guarantee our national security and protect Americans from the threats of the Chinese Communist Party,” Commerce Secretary Wilbur Ross said in a statement, adding:
“At the President’s direction, we have taken significant action to combat China’s malicious collection of American citizens’ personal data, while promoting our national values,
democratic rules-based norms, and aggressive enforcement of U.S. laws and regulations.”

The Commerce Department noted that the “threats posed” by WeChat and TikTok are “not identical,
they are similar,” because “each collects vast swaths of data from users, including network activity, location data, and browsing and search histories,” alleging that each of the platforms is an “active participant in China’s civil-military fusion and is subject to mandatory cooperation with the intelligence services of the CCP.

“This combination results in the use of WeChat and
TikTok creating unacceptable risks to our national security.”

The Commerce Department ban prohibits U.S. app store downloads, as well as any use of WeChat’s mobile app “for the purpose of
transferring funds or processing payments within the U.S.” 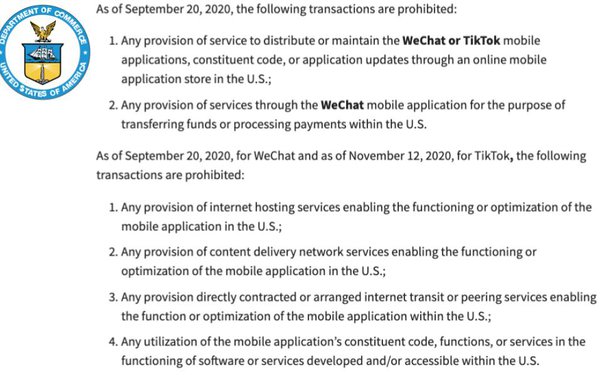