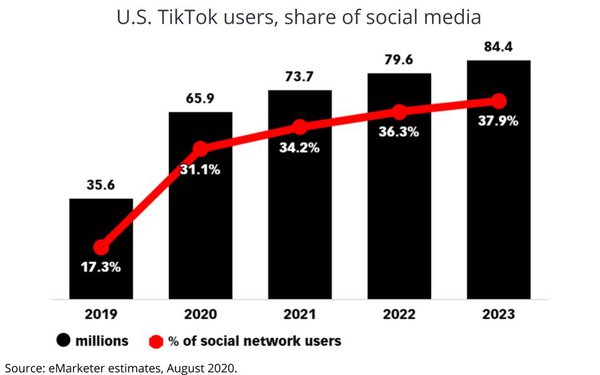 For a service I never heard of until
a few years ago, TikTok has emerged as one of the most entertaining digital media platforms. No, not the user-generated video snippets that appear on the screens of those who have installed the app,
but for journalists covering the on-again, off-again nature of its fate in the U.S. media marketplace.

And if you had told me in advance what the latest episode would be — the
President of the United States making a deal contingent on receiving a $5 billion shakedown payment to fund his project to educate America’s public schoolchildren on “real” history
— and that he would publicly state the quid pro quo as doing him “a favor” — I wouldn’t have believed you.

But that’s where we are. And here’s where
things stand.

On Saturday, as the Department of Commerce’s U.S. ban on TikTok took effect, a deal emerged that would spin the global operations of the Chinese company off from
China’s ByteDance and establish a new U.S.-owned company backed by Oracle, Walmart, and ByteDance’s existing U.S. venture capital partners that is expected to ultimately take it
public.

Oracle, which had already announced a deal making it TikTok’s “trusted” technology partner, would own 12.5%, and Walmart would own 7.5%, in advance of an
initial public offering valuing the new U.S. company as much as $60 billion, or $55 billion after the President gets his cut.

For Walmart, the deal represents the latest in its
ongoing saga to position itself as a media company, coming just weeks after formally unveiling its Amazon Prime alternative Walmart+, but just months after divesting of its digital video-streaming
platform Vudu to Fandango.

The TikTok play is interesting in terms of Walmart’s on-again, off-again transformation into a digital media platform, because a big part of the
rationale for the TikTok investment is to “grow our third-party marketplace, fulfillment and
advertising business.”

If that sounds like Walmart also plans to compete more directly with Google, then you’re reading it the same way I do.

Yes,
Walmart has sent signals like this before (see its entry and exit in the digital video business re. Vudu above), and this one seems like more than bluster. As a significant strategic investor — with
Walmart’s CEO getting a seat on the new U.S. TikTok’s five-member board — Walmart will be in a unique position to leverage a digital platform that already has 66 million American users
installed, or nearly a third of the U.S. social media marketplace, according to eMarketer’s estimates.

So maybe we should add Facebook to the list of digital behemoths Walmart
plans to compete with once this deal is completed: Amazon, Google and Facebook. 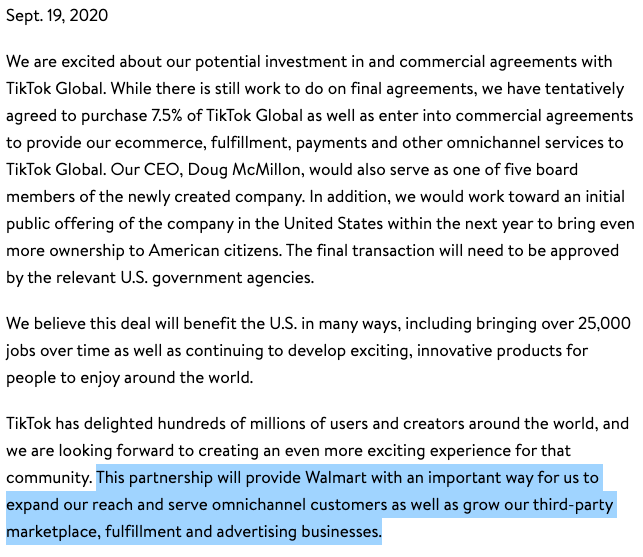