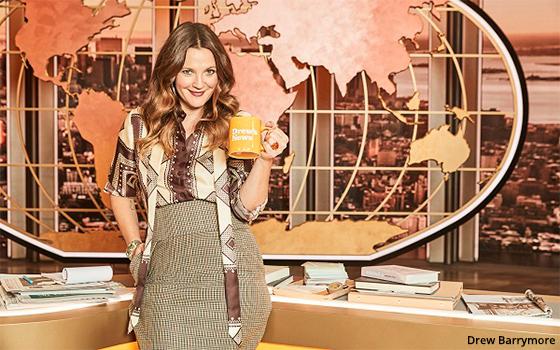 While observing Drew
Barrymore on the first day of her new daytime talk show on Monday, the first thoughts that came to mind had to do with caffeine, as in: How many cups of coffee did she have this morning?

Related thoughts included: Hey, Drew, try and control your morning caffeine intake, will ya? Or, message to Drew Barrymore’s producers: Please bar Drew from the break
room or she is likely to have a caffeine overdose

This line of thinking sprang from Drew’s first segments on the premiere of her show, seen in New York
on ViacomCBS-owned WCBS/Ch. 2 from 9 a.m. to 10 a.m.

As many others have done before her on Day One of new shows such as this one, Drew came on strong, to
put it mildly.

She must have been instructed to give it her all, because the result was a sense of
over-the-top excitement and enthusiasm that was so extreme that it felt unnecessarily exaggerated.

“This is all for you!” was one of the things
Drew exclaimed in this hyper-caffeinated opening introduction in which she promised that her show will cover “all aspects of life” — a tall order for a daytime talk show.

Dozens of hour-long syndicated talk shows have come and gone over the last 20 years, but it is difficult to remember one with a host
like her — an A-list movie star since childhood who is a member and descendant of possibly the most storied acting family in the history of American theater and movies.

Now 45, Drew has relocated from California to New York City. Her show is being produced at the CBS Broadcast Center on West 57th Street in Manhattan.

At one point in Monday’s premiere, after mildly flubbing a word or two, Drew
noted happily that the show was being broadcast live — which meant anything could happen.

While the show’s own press materials were a little vague on
this, it does appear that “The Drew Barrymore Show” will be seen live in markets such as New York, where it is slotted from 9 to 10 a.m. Eastern time.

As such, its main competition in the hour are two other live juggernauts — “Live! With Kelly and Ryan” on ABC and the third hour of “The Today Show” on
NBC.

What can Drew Barrymore offer that the others cannot? If Monday’s premiere is any indication, Drew seems to enjoy easy access to other A-listers
from Hollywood that the other shows’ bookers might not (not that “Live!” or “Today” are noticeably suffering from a lack of celebrity guests).

Monday’s guests on “The Drew Barrymore Show” included the two co-stars of her “Charlie’s Angels” movies — Lucy Liu and Cameron Diaz,
the latter appearing on stage in the form, apparently, of a hologram beamed in from the West Coast.

Drew insisted that this was the case even though this
technology was so effective that a viewer could not tell the difference.

Other scheduled guests coming up in the show’s inaugural week include Reese
Witherspoon, Charlize Theron, Jane Fonda (from another renowned Hollywood family) and Adam Sandler, co-star with Drew in a number of movies.

Elsewhere in her show’s
premiere, Drew presided over feelgood segments with regular folk. These included a south Jersey man who has established a food bank in his garage to feed neighbors and other people suffering during
the COVID lockdown, and a family from Brooklyn whose five members have all been working in “essential” jobs during the pandemic.

As a reward, Drew oversaw the renovation
and redecoration of their small backyard with products provided by sponsors such as Weber (a new stainless-steel grill) and Pottery Barn, which supplied the furniture.

As with so many of these five-day-a-week TV talk shows that have come before, the premiere of “The Drew Barrymore Show” packed a lot of content into its 40-plus-minute length
(the time left in the 60-minute time frame after you subtract commercial time).

A viewer who has seen so many of these come and go in a lifetime of watching
TV has the same question he has always asked after watching the first couple of shows: After they exhaust the list of celebrity friends of Drew in the first few weeks, what will they do
then?

By the end of show No. 1, Drew seemed to feel more comfortable in her new role as daytime talk-show host.

It
even became possible to cautiously offer an answer to the above question: Whatever they do or do not do, Drew herself was so likable that even a grizzled TV blogger could root for her to succeed.