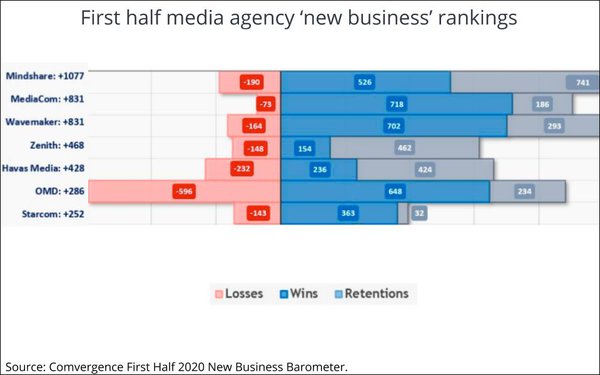 According to the firm’s report (“New Business Barometer for H1 2020”)
Mindshare is the top global media agency in new business results, with net total billings of $1.1 billion, including $741 million worth of accounts that were successfully defended in formal reviews
during the period.

According to the report, Mindshare’s performance was particularly strong in China (where it won the PepsiCo business in the first quarter) and North America,
including a WW (FKA Weight Watchers) assignment awarded in June.

MediaCom and Wavemaker ranked 2nd and 3rd, with each collecting net total billings of $831million including $186 million
and $293 million in retentions, respectively.

With the COVID-19 pandemic disrupting most aspects of
business, media-pitch activity was softer in the first half of 2020 with a total estimated $10.4 billion in play versus the same period in 2019 which had about $11.4 billion in play, per the
COMvergence assessment.

By holding company group, not surprisingly GroupM was top-ranked, with about $3.7 billion in total net new billings and about $3 billion ahead of 2nd-ranked Publicis
Media ($675 million). Havas Media Group was third-ranked.

GroupM’s winning effort on the business development front helped stabilize the company a bit during a period when it (and many agency
groups) were severely impacted by the COVID-19 crisis.

By region, China had about $3 billion of billings in play followed by the U.S. ($2.6 billion).

Among the largest pitches during the period were Diageo and Telefonica ($350 million each), Hasbro ($250 million) and Sephora ($150 million).