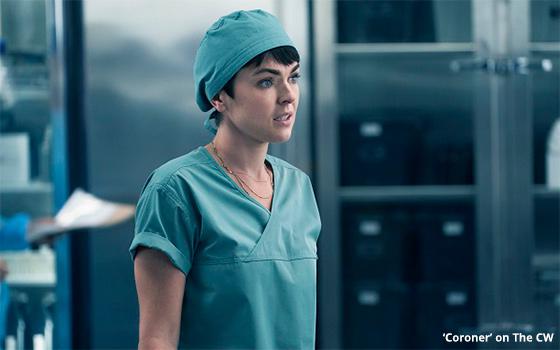 In the middle of a red-hot summer of illness and strife
comes a new drama series about death and a woman who is preoccupied with it both personally and professionally.

Clearly, The CW does not intend to cheer us all up next Wednesday night with the
premiere of this new show called “The Coroner.” For some reason, every time I think of this title, I think of “The Undertaker,” who is a character in WWE wrestling, not a
detective/sleuth in a prime-time cop show.

That’s the CW’s “Coroner,” played by Serinda Swan, in the photo above, as she is about to embark on another post-mortem, or face
off against a stubborn colleague who resents her.

This series comes to U.S. TV via Canada. In the show, the titular coroner is the new head medical examiner for the city of Toronto.

In
next Wednesday’s premiere, she is seen starting her new job, and before you can say “Quincy, M.E.,” she is clashing with at least one veteran pathologist.

In her first case, she is
trying to determine whether the deaths of two teenagers in juvenile detention — one male and one female — were suicides or murders.

Whether or not this coroner, who is decidedly not a
teenager, will delve only into crimes and deaths in which teenagers are involved remains to be seen.

This teenage suicide plot line in the series premiere certainly conforms to The CW’s
mission to aim its shows at teens and young adults. However, the teens who are seen confined to this detention center seem wholly miscast as young criminals.

As it happens, the coroner of the
title is having her own life issues at the moment, including coping with the sudden death of her 40-year-old husband and the debts he left behind resulting from a gambling addiction.

The truth
is, the premiere episode, which I watched this week, was not at all a bad show. But this is a summer in crisis — unlike any summer most of us can ever remember having previously.

Thus, the
question that comes to mind most concerning this sad, maudlin, show about death is this: Why this show? And why now?

Or to put it another way, why does TV content gravitate so readily to sad
themes? Why isn’t anyone in television showing us anything happy, optimistic, inspirational or aspirational?

I have no answer to these questions. Perhaps somebody else does.