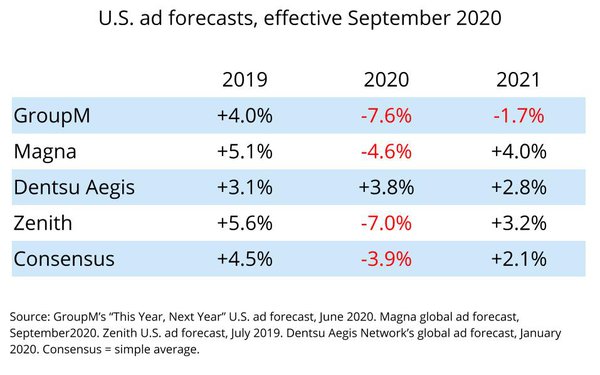 IPG Mediabrands’ Magna unit has revised its
2020 U.S. ad outlook down once again, but is keeping its 2021 forecast the same.

Magna now projects the U.S. ad economy will decline 4.6%, three-tenths of a percentage point more than the 4.3% it
projected U.S. ad spending would fall this year.

Magna’s revised outlook bring the agency holding company forecast consensus down to 3.9%
from 3.8% in its last update, when Zenith released new estimates in July.

While Dentsu Aegis Network has yet to release an update from its year-end 2019 forecast, WPP’s GroupM Saturday indicated the global ad economy is rebounding faster than
expected, and that it is “even going positive in some markets,” although it didn’t specify which ones.

In fact, Magna’s update indicates the U.S. ad economy fell 7.2% during the first half,
suggesting that the second half is in fact rebounding. Magna projects second-half U.S. ad spending will erode only 2.0% from the second half of 2019.

“The Covid crisis has hastened the
normal end of the economic cycle and brought on the worst recession ever,” Vincent Letang, executive vice president of global market intelligence at Magna states in the updated report.

“In
this context, classically, branding budgets and linear media spend are cut disproportionally while lower-funnel market mechanisms and digital ad formats show much greater resilience, boosted further
by the acceleration of e-commerce in the Covid and post-Covid world,” he continues, noting, “The sheer size of digital advertising in 2020 (approx. 55% of the U.S. ad market) and its resilience in
this economic environment explains the relatively modest decline Magna forecasts for the whole year (-4.6%) despite the severity of the economic recession, compared to the double-digit decline
2008-2009 (-12%) when digital media was still nascent. For linear media, however, 2020 remains brutal, but Magna is confident that ad revenues will stabilize and recover in 2021.” 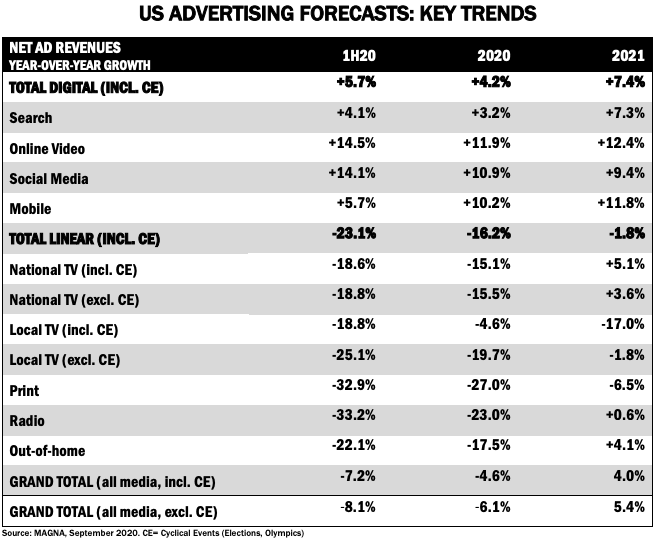