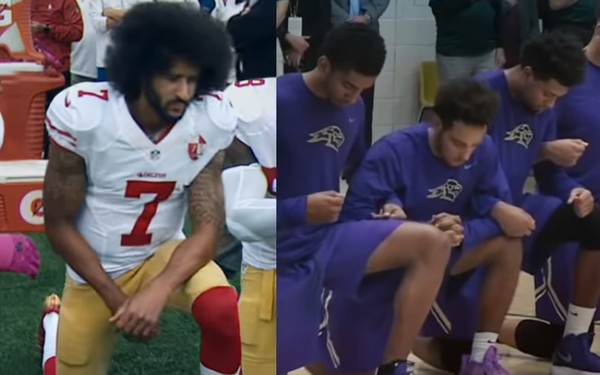 Nike knows just how much sports fans have suffered these last few months, and it’s
welcoming the NBA back with one of the most complex commercials ever.

Called “You Can’t Stop Us,” the third film is set to break during basketball’s long-anticipated
return from its halt to the season back in March. The ad crushes 4,000 pieces of footage from 24 sports into a thrilling 90-second tribute to the ways athletes bounce back. Narrated by soccer star
Megan Rapinoe, the spot blends 36 pairs of athletes into one another, emphasizing “commonalities shared by athletes around the world.”

And while the spot has all the athletic energy viewers expect from Nike, it’s got an even more amped-up activist tone.

“We are not going back to an old normal,” says the Rapinoe voiceover. “We have all these people in the streets, using their voices, and those voices are being heard. I ask people
to be energized by this moment and not let up. I believe it’s everybody’s responsibility to advocate for change.”

Wieden + Kennedy is the agency.

The spot — like the
NBA comeback — puts Black Lives Matter on center court, at a time when Nike is under intense scrutiny.

Besides dealing with protests at Nike headquarters that call it out for lack of
diversity, it also just announced the departure of the executive in charge of diversity and inclusion.

And it is also spelling out the specifics of previously announced contributions to
promote social justice. Back in June, the company’s Jordan Brand said it would donate $100 million over 10 years.

Nike now says donations will focus on social justice, economic justice
and education and awareness. Those include donations of $1 million each to the NAACP Legal Defense and Educational Fund and the Formerly Incarcerated & Convicted People and Families Movement
(FICPFM), as well as $500,000 to Black Voters Matter.

And Nike says its $40 million gift, spread over four years, will also include a $1 million grant to the NAACP’s Legal Defense and
Educational Fund, and another $1 million to that organization’s empowerment programs. It also intends to give $1 million to Black Girls CODE.