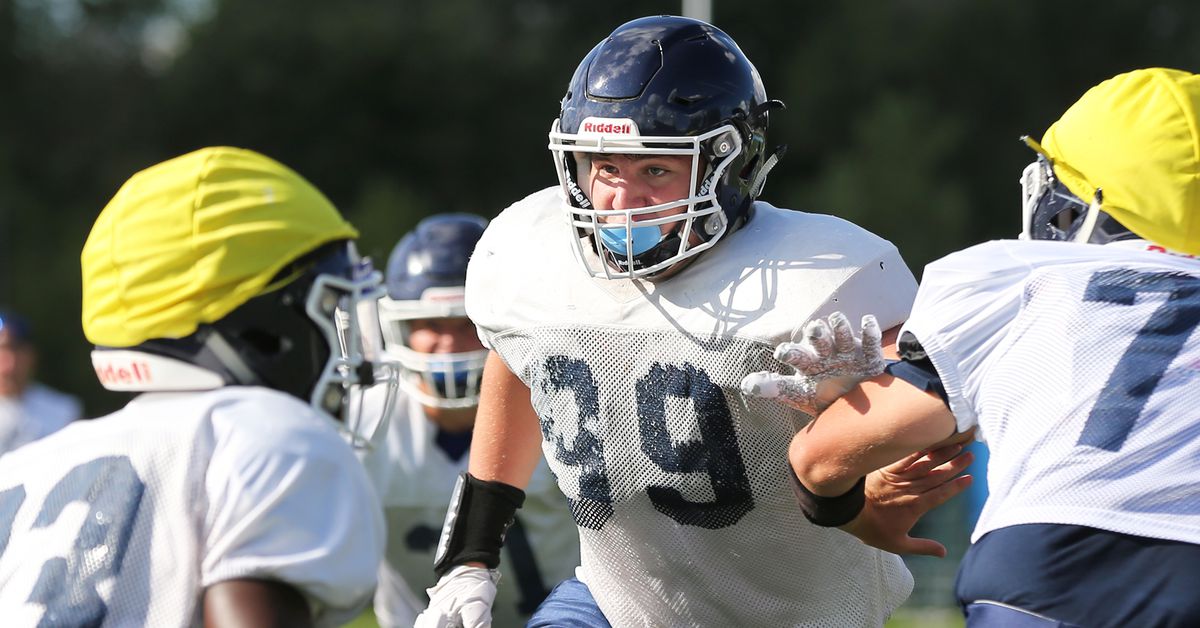 The IHSA plans to play football in the spring, but at least three high-profile local players already have opted out.

Defensive end Ryan Keeler and center Domenic Virelli, two returning starters from Nazareth’s Class 7A runner-up team, won’t be with the Roadrunners when practice is scheduled to start in February.

Keeler said in a text message Wednesday he expects to transfer out of state to play this fall or finish his high school graduation online. Either way, he plans to graduate after the first semester in order to enroll in college early.

Virelli announced on Twitter Wednesday he is transferring to Dowling Catholic in West Des Moines, Iowa, and plans to play there this fall.

Also heading out of state is Montini offensive lineman Brett Kuczynski, who said Thursday on Twitter he is transferring to New Smyrna Beach in Florida.

Keeler said he was “saddened” by the IHSA’s decision to move football to the spring because of the COVID-19 pandemic.

“I would love to stay at Nazareth and do everything I can to help my team and coach (Tim) Racki win another state title,” Keeler said.

But without fall football and given Nazareth’s policy prohibiting early graduation, Keeler said the decision to leave “is easy now.”

Keeler, a 6-5, 250-pounder, is one of the state’s top uncommitted players in the Class of 2021. The three-star prospect is 18th in Illinois in 247sports.com’s composite ratings and has more than 30 scholarship offers, including two from the SEC (Ole Miss, Kentucky) and 10 from the Big Ten.

He plans to commit before the end of the summer, a timetable that hasn’t changed because of the COVID-19 shutdown.

“Just tough because we can’t go on any visits and see the (colleges) anymore,” he said, “The coaches recruiting me have done a great job doing the Zooms and virtual tours. Still doesn’t replace the actual feeling you can get from being on campus.”

Though Keeler has plenty of college options, he knows many other players don’t. And Illinois’ move to spring football won’t improve that situation.

“I see this affecting kids’ recruiting in a big way,” Keeler said. “The first three to four games of the kids’ (senior) season is the make or break in a scholarship offer. Seniors will not have that opportunity anymore.”

That reality helped Virelli make up his mind to move to Iowa. Though he has been getting small-college interest as an offensive lineman, Virelli is a nationally ranked long snapper prospect with interest from North Dakota State, Wisconsin and Indiana.

To get the college offer he’s looking for, Virelli figured playing fall football is a must.

“I can’t wait till the spring,” Virelli said.

Iowa made sense as a destination because his family has roots there, and Dowling made sense for another reason.

“I wanted a school that would mirror Naz as much as possible,” Virelli said.

Leaving his teammates won’t be easy, said Virelli, who was looking forward to a return trip to state after losing to Mount Carmel in last year’s final.

Keeler and Virelli both will miss playing for Racki.

“Everybody knows about coach Racki,” Virelli said. “He’s been pretty much a second dad to me.”

“Coach Racki and I will always be friends,” Keeler said. “He is a true mentor and a great man. … He cares about what you do off the field 10 times more than what you’ll ever do on the field.

“He is focused on developing great men not just great football players.”

Kuczynski, a 6-0, 235-pounder, also is a nationally ranked long snapper prospect. He wanted a similar timeline to Keeler’s, which is why he’s headed to Florida.

“It was a long and hard decision,” Kuczynski wrote on Twitter, “but my motives are to play the sport I love my senior year, graduate early and have an in-school education.”