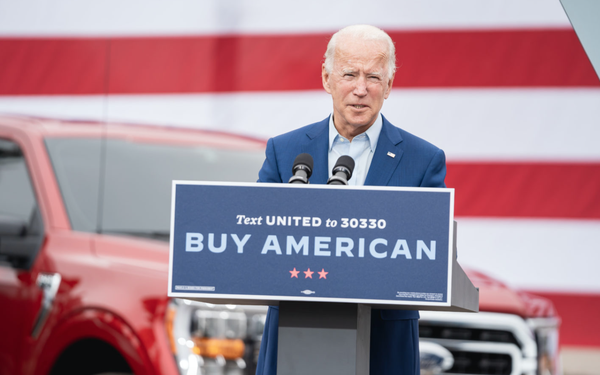 As the 2020
election quickly approaches, it’s important for political marketers to understand all that they can about voters.

Lotame simply states: “The data was sourced from Lotame Panorama, a suite of data enrichment solutions that
use first-, second- and third-party data to create and analyze addressable audiences across the cookie-challenged web, mobile app, and OTT environments. The Republican and Democratic profiles are
defined by 190 million state and county registered voter files.”

My first reaction to the data is that no one from metropolitan Detroit was surveyed. The vast majority of United Auto Workers members, who work for Ford Motor Co., General
Motors and Fiat Chrysler Automobiles, vote Democratic and drive vehicles from the companies they work for, as do their families. The UAW endorsed Joe Biden back in April.

During Biden’s recent election stops in Michigan, he stood
behind a podium with the placard that read “Buy American.” It might have been lip service given his location, but the candidate does drive a General Motors product, a Chevrolet Corvette,
while Trump is driven around in the White House limousine, a GM-built Cadillac nicknamed “The Beast.” Trump owns a collection of luxury and performance cars, including a 2003 Mercedes-Benz
SLR McLaren, a 1956 Rolls-Royce Silver Cloud, a Tesla Roadster and a 2011 Chevrolet Camaro Indy 500 pace car, according to AutoBlog.

I took a short road trip this weekend from Detroit to Sandusky, Ohio and traveled through the
farmlands of northwestern Ohio (where many folks drive Jeeps because of their connection to the nearby Toledo Jeep plant.) Another hugely influential union, the International Brotherhood of Electrical
Workers endorsed Biden even earlier, back in February, and I saw yard sign after yard
sign proclaiming IBEW for Biden.

On backroads from Toledo to Sandusky, I counted 29 yard signs for President Trump and 25 for Biden. So Ohio could be as close as the pollsters are predicting.
Despite being in a union, it’s not a given that IBEW members drive U.S. Big Three vehicles.

Hondas are quite popular in Ohio outside of Toledo since the automaker has two manufacturing
plants and an engine plant there. According to Insurify as well as Kelley Blue Book, the Honda Civic is the best-selling vehicle in the
state.

Yet Ohio was a red state in the last presidential election, choosing Donald Trump by a margin of 8.13 points, which again would contradict the Lotame findings.

Bottom
line, while there could be some correlation between political affiliations and brand preferences, it’s not definitive. Clearly a lot of other factors are at play, especial when it comes to such
a major purchase as a vehicle.